I tried the Blueberry Grille today for the second time in a week. It has potential, but has some issues to iron out.

The first time was on a Sunday afternoon a little past prime time at 1:30 pm. The wait list estimated 45 minutes, but we were seated in 35 minutes. We noticed there were a lot of empty tables; the business had a shortage of staff and so could not fill every table. I respect a restaurant that closes tables rather than fill them and have you waiting. But I also had to wonder why a higher end restaurant that serves alcohol ( which means higher tips) was having trouble finding enough staff. Is the restaurant paying too low a wages? Hard to work for? Curious minds want to know.

We sat outside, and the patio is a gorgeous seating area. There is a row of seats at an outdoor bar, and a gas fireplace, in addition to many tables. Our waitress was very good, but had about 7-8 tables. She finally barked at someone and a younger less motivated waitress came outside and picked up two tables. Our waitress was definitely the better of the two.

For an appetizer, we had the Bourbon Surf and Turf. It consisted of bacon wrapped scallops with chunks of pork belly, all served over roasted wedge potatoes, covered in the bourbon sauce. This appetizer was killer. I do not like sweet entrees, but the bourbon balanced the sweet in the sauce. The scallops and pork belly were exquisite.

For entrees, we tried two of their skillets: the jungle island and the cheeso rizo. The jungle island had corned beef, potatoes, mushrooms, jalapenos, cheddar jack cheeses with avocado creme. The cheeso rizo had chorizo sausage with vegetables and cheese. Portion size for the skillets was large; each skillet contained a massive amount of food. Both were a bit spicy, but not overkill with the heat.

We ended with a “dessert” of the blueberry hushpuppies. Little chunks of blueberry were cooked into the hushpuppies, and they were served with honey butter and a blueberry compote. Again, I’m not a big fan of sweet in my savory dishes, but the hushpuppies didn’t seem to have any sugar in them; just the blueberries, and I found them quite tasty. My date took the left overs home 🙂

They do have a very good cocktail list; unfortunately, we were not drinking that day. All in all a good experience.

Today, I stopped in for a weekday breakfast, and sat at the bar. The place was not crowded, and it took 6 minutes for the bartender to come out of the back. I had unsweet iced tea, and unfortunately, it was old. This happens at restaurants that don’t sell a ton of iced tea and don’t clean out their brewer properly. I gave up after a sip and stuck with water.

For food, I tried their crab cake benedict. Their crab cake itself was excellent, and the english muffin was good sized. Unfortunately, the egg yolks were solid (hard boiled), and eggs are supposed to be runny on a benedict. The flavor was good, but would have been better with eggs less cooked. I got it with a side of fruit, and they gave me decent strawberries and blueberries.

Since this place is known for anything blueberry, I decided to end with a blueberry muffin. When it came out, I was initially excited. It was sliced in half and briefly grilled before being served, so butter melted on it easily. The texture and presentation of the muffin was great. Unfortunately, it was WAY too sweet. Donuts and kids candy pales in comparison. I hate it when restaurants just overdose an item in sugar.

So, overall, I recommend people trying Blueberry Grille, but enjoyed the skillets a lot more than the benedict. 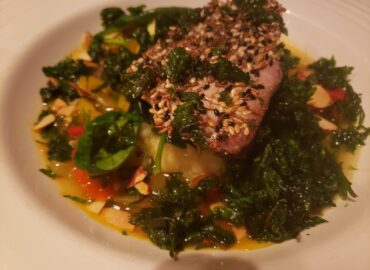 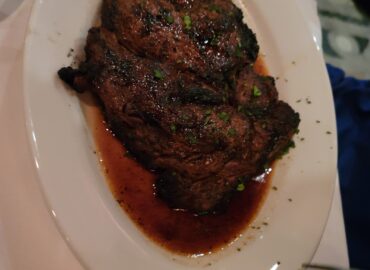 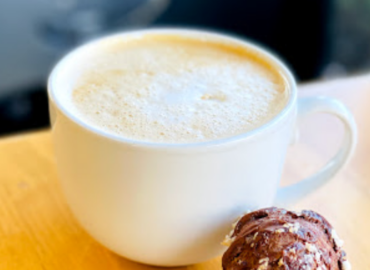