Luigi’s Trattoria is my favorite Italian restaurant in the Myrtle Beach area. It is located one building off of Kings Highway (17) on the north side of Myrtle Beach proper (as opposed to the town of North Myrtle Beach, which is another 10 miles or so north). It doesn’t have one of those giant touristy signs to try to attract the tourists. It’s not hard to find but you won’t find it unless you heard about it from another person or an online review.

The ambiance is casual although a formal affair would still be comfortable there. All of Myrtle Beach is a very beachfront casual dining atmosphere but you generally won’t see people wearing nothing but bathing suits and flip flops at Luigi’s.

I have been to Luigi’s several times and the food has been excellent every single time. Their traditional marinara Italian dishes are very good (WARNING: their meals are super filling).  My 19 year old son who is 6 foot 4 inches tall and a varsity athlete could not finish his meal.

For those of you that haven’t tried it marsala is a semi sweet wine from Sicily that is fortified (meaning a spirit like Brandy has been added to the wine). Marsala is mostly used for cooking and baking rather than drinking straight. I once used it as a substitute in my homemade tiramisu and it came out marvelous. But my favorite way to have marsala is with a sauce. A traditional marsala sauce uses marsala wine, onions garlic, lots of mushrooms, bone broth, a few spices and sometimes another fortified wine like port. I am a huge cooked mushroom fan anyway, so marsala just takes the mushroom sauce to the next level. Serve marsala sauce over pasta with veal or chicken and you end up with a delicious meal.

On a previous visit I tried their scallops with risotto, and that might be the best risotto I have ever had it.  The risotto was so soft, rich and creamy and yet spiced mild so as not to overpower the scallops. I will admit on that trip that I was unable to finish the dish we took home a half portion for the next meal at home.

Luigi’s has an extensive wine list, and also serves beer and cocktails. We tried several of the cocktails and found them to be yummy.  I wouldn’t go as far as to say they cocktail bar; wine is definitely their strength, but for those of you like myself that don’t drink much wine they have enough cocktails to intrigue you.

For dessert, I had the tiramisu, which was solid traditional tiramisu except for a little chocolate sauce to appease Americans. Proper tiramisu does NOT need chocolate but at least Luigi’s didn’t drown it to the detriment of the mascarpone cheese in the cream layer that tastes so good.

For fine dining in the Myrtle Beach area, Luigi’s should be one of the top 5 places you MUST try. 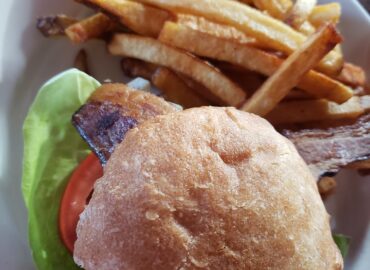